One of Japan’s last “whaling community” remains on the Japanese coast on the edge of the Pacific Ocean. Following the government’s reintroduction of whaling, the community finds itself confronted with the discrepancy between traditional identity and contemporary values.

Sophie Dascal obtained a Bachelor’s degree in History and Philosophy of Art in 2013, followed by a Master’s degree in History and Aesthetics of Cinema in 2015, both at the University of Lausanne. She established herself as an independent film and video maker in Geneva in 2018, after studying cinema at the HEAD-Geneva. During her three years of studies, she made several documentary essays and experimented with video installation during her one-year exchange at the Kassel Kunsthochschule (D), where she exhibited her installation Decadence at documenta14. In addition to her personal projects, she works as a director of photography, notably on Justine Fabre’s films Entre le ciel et la terre, Madeleine après trente ans, selected in several festivals, and Jaizkibel, shot in April 2019. Her diploma film Angor Pectoris was selected among others at the Festival International Visions du Réel in 2019, where she won the META Cultural Foundation Award. 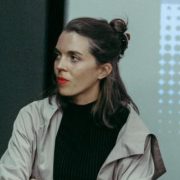