In the chaos of the Cameroonian diaspora uprising in Europe, young skeptic Boya, an art student from Cameroon, newly arrived in Geneva, is happy to be outside of his country for the first time in his life. His new life is short lived when he is coerced by the Permanent Mission of the Republic of Cameroon to be their informer among the diaspora, finding himself at crossroads of two forces: one political and one romantic.

Philbert Aimé Mbabazi Sharangabo starts making films in Rwanda in 2010. His first short film Rhuago won the Signis Award for Best Emerging Filmmaker in East Africa at the Zanzibar International Film Festival in 2012. He directed 3 other short films, screened at international festivals, before joining the cinema/Cinéma du Réel department of the Haute École d’Art et de Design de Genève, where he graduated in 2017. His school films include Keza Lyn, The Liberators (in competition at Vision du Réel Nyon 2016 and Kurzfilmtage Winterthur where he received a special mention in the Swiss film school category) and Versus (in competition at the Oberhausen, Tampere and Uppsala International Festivals).
His latest short film I Got My Things and Left was screened at the Kurzfilmtage Winterthur (Special Mention), at the Rotterdam International Film Festival and won the Grand Prize at the 2019 Oberhausen International Festival. He is currently writing his first feature film, Spectrum. 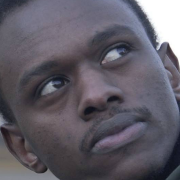